All Central Oregon counties have fully recovered from job losses in 2020, and are heading into expansionary growth passing their pre-pandemic peaks. Deschutes’ and Jefferson’s employment grew by 2.5% (2,150 jobs) and 3.3% (220), respectively, over the last 12 months, which was slightly slower than Oregon’s job growth rate of 4.4%. Crook had a rapid growth rate of 7.1%, adding 490 jobs.

The seasonally adjusted unemployment rate in Oregon edged down to 3.6% in May, reaching its lowest level in two years, nearly reaching Oregon’s record low of 3.4%, which occurred in November 2019 through February 2020. Unemployment also dropped in all three Central Oregon counties to near record lows. Crook sits at 4.8% (lowest monthly rate ever is 4.7%), Deschutes sits at 3.4% (3.3%), and Jefferson sits at 4.6% (4.4%).

Topic of the Month: Unemployment Rate for Different Population Characteristics

Unemployment in the US and Oregon are both at historically low rates, both sitting at 3.6 percent. The unemployment rate represents the percentage of people in the labor force who are unemployed. To be in the labor force, a person has to be employed, had actively looked for work in the last 4 weeks or be on temporary layoff. Because the unemployment rate aggregates the whole population, it is a good measure of the country as a whole, but does not accurately represent all parts of the population.

You can explore more about unemployment through the Bureau of Labor Statistics here. 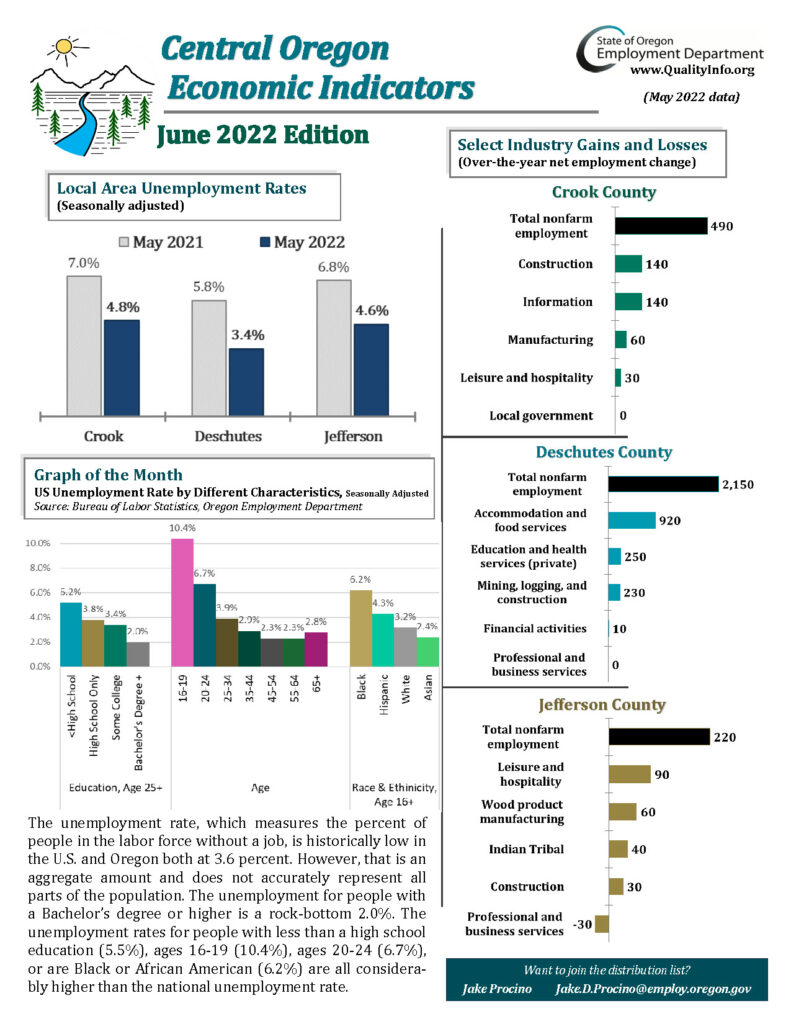