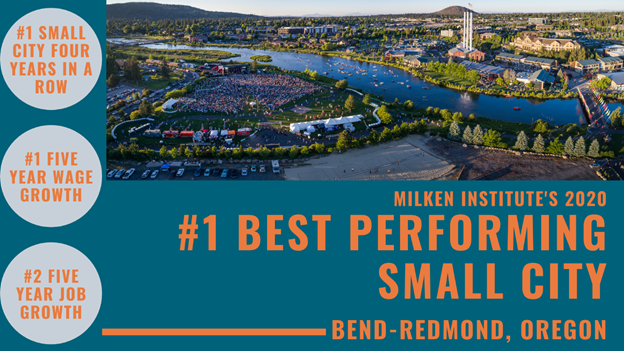 All nine key indicators the Milken Institute uses to compile these listings ranked the Bend-Redmond MSA in the top 30 out of a total of 201 small U.S. metros. The report specifically mentioned high-tech GDP growth and high-tech GDP concentration as contributing to the region’s economic expansion, sectors Economic Development for Central Oregon (EDCO) has dedicated both emphasis and effort to over the past decade.

Roger Lee, EDCO’s CEO, noted “We have come to anticipate this report as both a measure of success for our economic development work as well as a barometer on areas we can improve upon. I’m particularly proud of the manufacturing employment growth cited in the report: over 2,100 new jobs since the previous year. Additionally, in the past eight years overall manufacturing jobs have grown by 60% and total wages by nearly 90%. This report further proves EDCO’s efforts are creating a positive impact on our regional economy.”

Below is an excerpt from the report, which can be found in its entirety here:
“For the fourth year in a row, Bend-Redmond, OR, ranks first on the Best-Performing Small Cities Index. All of its indicators rank in the top 30. Clear standouts are the first-place ranking for five-year wage growth, second-place ranking on five-year job growth, and fifth-place rankings on five-year high-tech GDP growth and high-tech concentration. Once more, the metro posted high ranks in its five-year metrics with consistent high ranks in its one-year indicators. The metro’s five-year ranks should remain a source of strength for the near term. While the metro has lost a few spots on the number of concentrated high-tech industries (LQ > 1), its diverse economy is anchored by more traditional industries.”