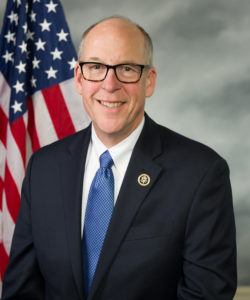 As a small business owner himself, Greg Walden is known for supporting small businesses and was recognized as, “Guardian of Small Business” by the National Federation of Independent Business (NFIB) in 2016.

On October 28, Congressman Greg Walden announced through a video on Facebook, “I will not seek re-election to the U.S. House of Representatives, nor election to any other office, but instead I will close the public service chapter of my life.” Greg Walden has represented Congressional District 2, covering 20 counties in central, southern, and eastern Oregon, since 1998. As a small business owner himself, Greg Walden is known for supporting small businesses and was recognized as, “Guardian of Small Business” by the National Federation of Independent Business (NFIB) in 2016.

Earlier this year Bend Chamber CEO Katy Brooks traveled to D.C. with City and County leaders to advocate for matching federal funds in the form of a Department of Transportation grant for $60.4 million. Mayor Sally Russell, Councilor Justin Livingston, City Manager Eric King and Chris Doty, Transportation Director for Deschutes County, met with Oregon’s congressional delegation and the US Department of Transportation (US DOT) to make the case for relieving congestion, improving the flow of freight and commerce, and improving safety at this busy intersection. Congressman Greg Walden was instrumental in bringing this funding award home to Bend to help reroute Highway 97 at the Cooley Rd on the north end of Bend.

Thank you, Congressman Greg Walden, for your public service in Salem and in Congress.

With the announcement of Congressman Greg Walden’s retirement, Congressional District 2 will have an open seat during the 2020 election, the first time in 20 years. As a partisan seat this campaign will have a primary and general election next year. Candidates who have filed or expressed serious consideration include Cliff Bentz, State Senator from Ontario, Knute Buehler, former State Representative from Bend, Jason Atkinson, former State Senator from Central Point. There is still much speculation, and chatter, of who else may be interested in representing one of the geographically largest Congressional districts, about 2/3 of the state of Oregon, back in Washington D.C.

This entry was written by Stephanie Shaver, posted on November 8, 2019 at 9:41 am, filed under Advocacy.